Visit to Miraj to understand making of Tanpura and Sitar

My guru, Sameer Dublay handles the music department in Flame school of performing art. One of the subjects taught there is Organology. Organology (from Greek: ὄργανον - organon, "instrument" and λόγος - logos, "study") is the science of musical instruments and their classification. The instrument side of the course is handled by our friend Sajid Mirajkar, a well-known instrument maker and seller in Pune. Sajid is the son of an illustrious father, Yusufbhai Mirajkar who was known for his instrument-making skills throughout the country. The Physics part of the course is handled by Prof. Atul Phadke.  As part of the field visit, Sameer sir and Sajidbhai had planned a visit to Miraj on 17th August. By strange coincidence it was also the 2nd death anniversary of Yusufbhai, who met with a fatal accident on the same day in 2011. His remains have been buried at Miraj in the same dargaah where we were planning a visit.
We started from Pune at about 8 in the morning and reached Miraj, about 240 KMs, at 12 pm. As part of seeing the instrument making, we visited four places. First is where all the woodwork is done (workshop of Abdul Hamid). Second is where metal work is done (shop of Majidbhai), third was the shop of Umarsaheb Mirajkar. Last stop was at the famous dargaah of Khwaja Mir saheb.
This is just an attempt to document everything which was discussed throughout the day.

On how it all began in Miraj:  Faridsaheb Sitarmaker is considered as the father of string instruments in Miraj. Faridsaheb was a shikalgar (शिकलगार / maker of swords etc) and was based in Bijapur. 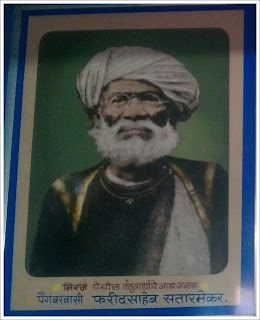 The Nizam wanted to make new metallic top of the arch stone (कळस) for Khwaja Meersaheb’s dargaah in Miraj. A couple of other artists were engaged for this but their creations were not up to the Nijam’s liking. So he asked Faridsaheb to make it. That’s when Faridsaheb and his brother Mohoddinsaheb came to Miraj. They were successful in pleasing the Nijam. Sangli had a vibrant music scene at the time and lot of artists used to perform for the Sangli’s King Patwardhan sarkar. Faridsaheb, being a music lover used to attend the concerts. At that time (around 1850), musical instruments such as the tanpura and the sitar were being made in only Banaras and Kolkata. Maintaining and repairing such instruments was a huge problem in Maharashtra. This was also the time when British had started banning making weapons. So, the King asked these talented brothers to see if they can repair the music instruments. They got success in this new endeavour. Encouraged by the King, Faridsaheb decided to attempt making the instruments locally and the rest is the history. 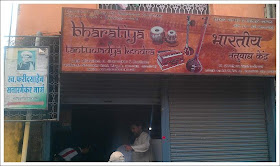 This is the same shop, started in 1850 by Faridsaheb.

Miraj today has over 400 craftsmen, all descendants of this talented and genius artist. Miraj tanpura is now considered as the best tanpura, and used by artists throughout India. 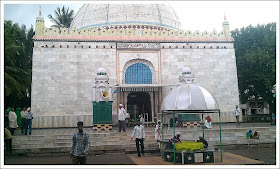 This is the famous dargaah of Khwaja Meersaheb. The tamarind tree on the right side is the same tree under which the Kirana gharana doyen Khansaheb Abdul Karim Khan practiced singing for hours. 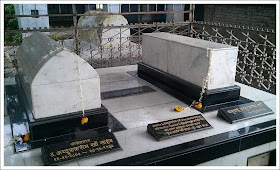 A three-day music festival coinciding with the Urs of Khwaja Mirsaheb is celebrated every year in the dargaah. It is also dedicated to the memory of Ustad Abdul Karim Khan.

How electronic tanpura changed the business structure:  About 20 years back, when the electronic tanpura was yet to become a commercial success, the business structure of tanpura-making in Miraj was different than what it is today. Each shop had its own craftsman on payroll. All stages of tanpura-making were handled in-house. As demand for the electronic tanpura surged, there was a temporary but definite decline in demand for the real tanpura. The shop owners had trouble maintaining the artists because of the decrease in demand. What happened in response to this is interesting. The same set of craftsmen who used to work “for” the shop moved back to their home. Each craftsman had his own speciality and had some role in the entire process of making the tanpura. So shop owners after getting an order from a customer began approaching different craftsmen with specific jobs based upon their expertise, and paid them on job-basis as against a fixed salary per month. Gradually this new model got well-established. Today all craftsmen in Miraj work at their home, at their own pace. There is no single “end-to-end” factory / manufacturing unit as such.
Challenges: I asked this question at all the 4 places I visited. ‘Do you get enough orders?’ All of them said that the quantity we produce is only limited by our own capability and time. There is no dearth of orders. We face difficulty in completing the orders in time. So business is doing well. But one challenge is that the younger generation in the family is not keen on entering the business. The problem is, when a young person enters into this he has to spend at least five years to understand the nuances of instrument making, and work for very little remuneration during this early stage. The younger generation doesn’t have patience for this. The fact that craft is taught by the veterans in house does not help because most of them have orthodox views about ‘teaching’. “Clean the floor for 6 months”, most of them insist.  Someone passed out of junior college (“12th-passed”) who can get jobs in BPO units for Rs. 10,000-15,000 a month doesn’t find this option interesting, even though it may pay him well after a while. Sajidbhai said that this is one of the biggest challenges for the business today.

Steps in tanpura making:
Growing the gourd (तुंबा / भोपळा):  This is grown at Pandharpur. These farmers, just like the craftsmen, have been doing this in the family for many generations now. The gourd is sown only once a year. Each craftsman has his fixed farmer. The farmer takes money before sowing and promises his entire produce to the craftsman. When the gourd is ready, the craftsman buys all of them from the farmer. This includes gourds of all sizes. Out of about a hundred pieces of gourd only two or three are big enough (over 55 inches in diameter) for a veena. About four or six are good (about 50-55 inches) for a male tanpura. The rest are used for female tanpuras and sitar.

Interestingly this variety of gourd is not edible and is poisonous. Even birds or animals don’t bother to eat this variety. The farmer has a trained eye and can find out which one of them is going to grow big. So he takes special care of it by cutting smaller ones around it, by placing it on a mound of mud/sand such that it ends up with a perfect shape. Sometimes after becoming fully grown the gourd is also tied up tightly to arrest further growth in order to maintain the shape.

In the 1850s, finding the gourd was a challenge for Faridsaheb. Because these are not edible farmers didn’t typically grow them. Only fakirs (फकीर) would carry them to store water. So, Faridsaheb used to wander in jungles in search of a fakir with a gourd! He then used to exchange it with him for a metallic pot.

A full-grown gourd is so heavy that it takes four people to lift it. The gourd is kept aside and dried for one year by which time it is so light that one person can lift eight of them with a single hand. Craftsmen keep their stock ready to be used throughout the coming year. After few days into drying, pesticide (the actual word used by Khwaja whose shop we visited was विष (जेहेर /poison)) is applied from the inside for keeping fungus away.

Making of the body (साचा. Also known as लाकूड काम or woodwork)
The dried gourd is left to soak in water for a day to make it soft enough to work on. It is then cleaned from the inside and outside. A cut is taken according to the size required. 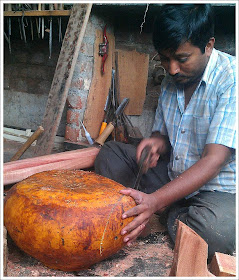 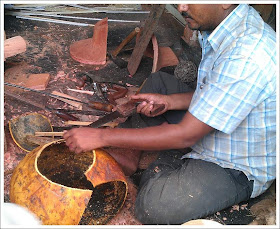 This gourd is now fitted in a wooden ‘gala’ (गला / neck) which has a slot made in it for the gourd to fit. Rest of the body including the gala, dandi is made out of Spanish Cedar (tun wood) or Teak. 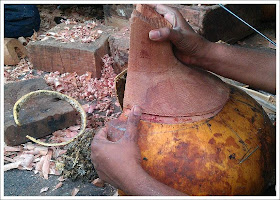 Because of the drying up, the gourd may not have perfect round shape as desired. So at this stage support is given from the inside and its shape is adjusted. 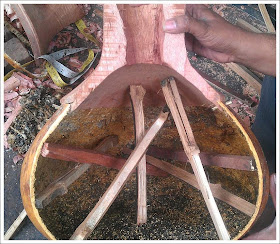 This may also require taking a cut near the galaa on the gourd so as to adjust the shape. This cut is supported by temporary metallic pins as seen in the picture below. 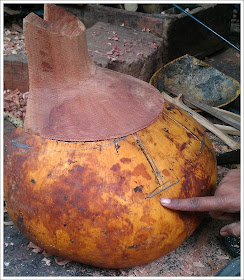 The gap seen above the pin is ‘filled’. (Khwaja said “हम इसका अन्दर से operation करते हैं / we ‘operate’ it from the inside).

The front side (tabli) is made separately. All the temporary support given in removed from the gourd, which now was shape as desired. Both the galaa and the front side are carved to have perfect thickness. Craftsmen measure the thickness by hitting upon and sounding the parts. They recognise the exact sound and stop only once it is reached. They do not need to measure it with instruments. Khwaja said that even a child in the house can identify the perfect sound. 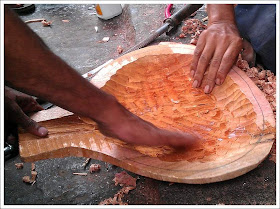 For making dandi, the wood is carved from the inside and then the cover gets fitted on it. In this entire process even a single metallic nail is not used. Specially made nails of bamboo wood are used. Women from the family make these nails after their daily house work. 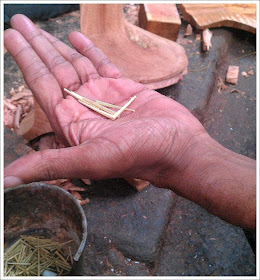 The body looks something like this when dandi is fitted. 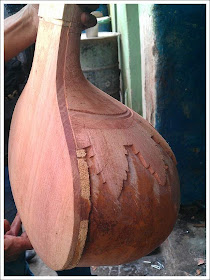 Slots are made on the body at the place where plastic is fitted for ornamentation. These slots can be seen above in the picture. 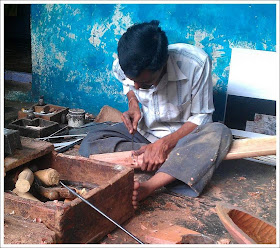 These slots are made such that when the plastic strip is fitted the levels match perfectly.

Decorative design is then hand-carved on this plastic. 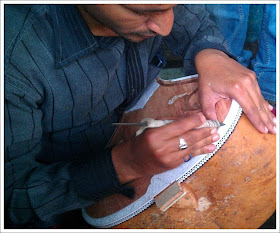 In the carved part of the plastic, charcoal powder is pushed using laakh (लाख / traditional glue). 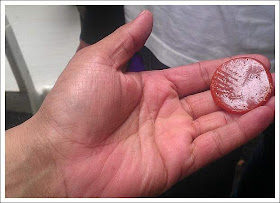 The body is now polished as per the colour required. Applying polish is also a time consuming process and requires skill. Paint cannot be applied because it would fill the natural gaps and that kills the sound.

This completes the body of the instrument.

This is when strings are attached, over the bridge, on both sides. Bridges were made out of  हस्तिदंत / ivory in the past. After a ban on ivory they were made out of सांबर शिंग / deer horn. After that was banned they are now made using camel bone 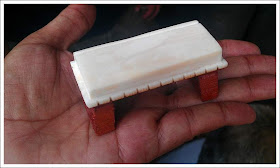 The last and the most critical and skilful work is ‘jawari’, which involves shaping the bridge to perfect shape and fineness that when the string running on it is plucked, it resonates a perfect, rounded (गोल) sound. 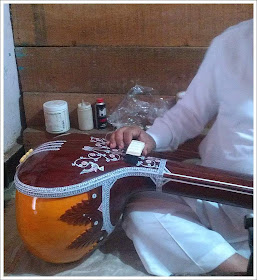